The US dollar surged to its highest level in 16 months as investors weighed in on the possible Fed tightening as early as mid-2022. This is well ahead of the contemplated moves of other major central banks. Last Friday, Fed vice chair Richard Clarida said that it may be appropriate for policymakers to discuss whether it is time to “speed up the tapering of bond-buying after inflation surged and job gains picked up.”

The dollar index (DXY), which measures the currency against a basket of six major currencies, was up 0.96 percent for the week at 96.029. Year-to-date, the DXY has strengthened 6.8 percent, fueled by a resurgent economy, rising bond yields, high inflation, record-high closes for the S&P 500 and the Nasdaq, and the growing developed-market policy divergence in favor of the greenback. In addition, the return of partial lockdowns caused by surging COVID infections in Europe also boosted the dollar’s safe-haven appeal. 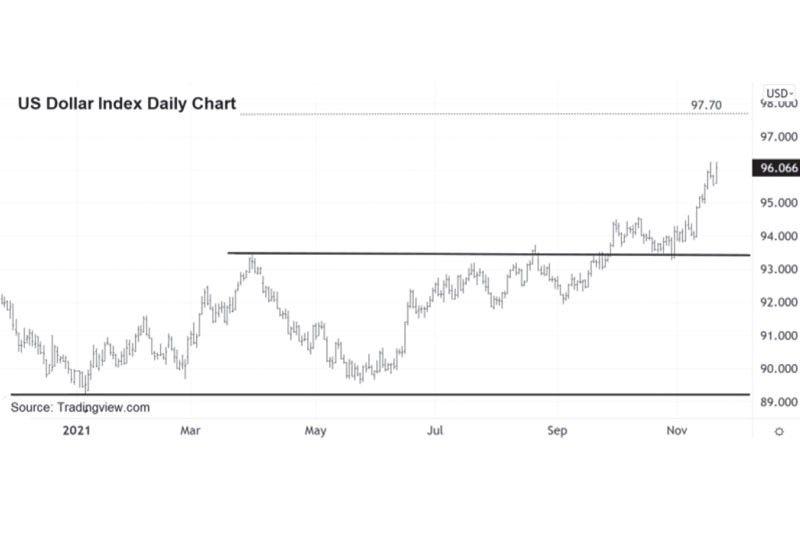 The Japanese yen declined the most among major currencies against the US dollar, falling 10.4 percent year-to-date. The euro, which has fallen to its weakest since July 2020, is down 8.2 percent for the year. ECB president Christine Lagarde said on Friday that a rate hike is unlikely in 2022.

Among Asian EM currencies, the Thai baht is still the worst-performing currency. Despite rallying to a two-month high after the government eased travel requirements in August, the baht is still down 9.5 percent year-to-date. Likewise, the Korean won fell 0.47 percent last week, extending its losses to 9.1 percent this year. Peso strong against other majors

As with most currencies, the Philippine peso declined 1.3 percent last week. The BSP maintained its policy rate at two percent, in contrast to other central banks that started raising rates. In a virtual briefing last week, BSP Governor Benjamin Diokno said the BSP would be patient in normalizing rates to help the economy recover fully from the effects of the pandemic. The peso is down 4.9 percent against the US dollar year-to-date.

Nevertheless, the peso is strong against other major currencies. Seldom do we see a strong peso during a strong dollar move. Philippine peso vs. the euro

The Philippine peso has strengthened against the euro in the past two months. The EUR/PHP rate now is trading at the lower bound of its one-year range near 57. A break below this level would indicate a stronger appreciation of the peso relative to the euro. Year-to-date, the peso is up 2.9 percent against the euro.

Philippine peso vs. the yen

The Philippine peso is likewise strong against the Japanese yen, trading near the lower end of its one-year range. Year-to-date, the peso has appreciated 5.7 percent against the yen. With the US dollar index surging to 16-month highs and the prospects of the Fed pulling back pandemic-era aid, it is worth noting that the peso is entering a seasonally favorable period. The peso is expected to remain generally firm against the US dollar as Christmas nears. OFW remittances have historically been high during the last quarter of the year. This adds further support for the peso.

Philequity Management is the fund manager of the leading mutual funds in the Philippines. Visit www.philequity.net to learn more about Philequity’s managed funds or to view previous articles. For inquiries or to send feedback, please call (02) 8250-8700 or email [email protected].